So... I decided randomly to google the organization that I've been looking into to go with to Korea... and what I found was not good. There were several different sites where these types of programs can be rated- and it was rated very poorly, especially on the integrity level (I don't think I ever saw more than one or two out of five). So this worries me. A lot. So I'm praying a lot about whether I should pursue this organization, if I should still go to Korea, if I should look into another organization, if I should look into going somewhere else, or if I should find something else all together... And I would appreciate added prayers.

Also, on the same note. My cousin, Andrew, just graduated high school. He had planned on going to a one-year intensive Bible training thingie called Arrowhead... well, he just found out they're not going to run this year. So Andrew has a summer job and then his fall plans have dropped out from under him.

Also, another note- My sister, Carli, is trying to decide what she's going to do this fall as well. She attended a Christian school for a year of college, and is trying to decide whether to go back or find somewhere else... She's headed on a great trip in July-August (trip being used loosely, here... while she'll be traveling far from little ole' Indiana, she will certainly not be on vacation!)

So I guess our family needs some major guidance... Which we're trusting God for. He has never let us down, and I don't think he plans on starting now... But, being human, we worry. So pray for each of us as we try to decide the right step for each of us in August? Thanks, guys! 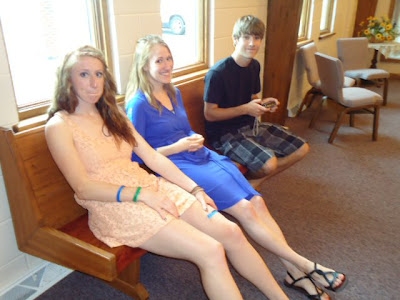 This is a terrible picture of all of us, but it was the only one on Facebook of just the three of us... Carli, me, Andrew... pray for usssss :)
Posted by Abbi at 7:08 PM